October 29, 2014|All Posts, Event Happenings
Home » Blog » All Posts » Guam’s 6th Luna Festival Highlights
On behalf of Creative Indeed, I would like to take this moment to give a huge THANK YOU to everyone who supported this year’s Luna Festival at Jeff’s Pirates Cove. The event was held yesterday, Sunday the 26th, from noon to 8pm. Well over 1000 people came to enjoy the festivities, many who came in costume. There were about 40 local vendors displaying and selling their goods and services, including art, jewelry, clothing, accessories, facepainting & henna, weavings, wood carvings, health and wellness services, unique home decor and crafts, books, cards, and the list goes on. There was a diverse array of creative talent showcased all day long. It rained a few times throughout the day, but we managed pretty well. The weather didn’t seem to deter anyone very much, in fact many said it was a welcomed cool-down. This year drew the largest crowd yet, both guests and vendors, and everyone seemed to be having a great time.
Entertainment Lineup
With Gavin Flores managing sound and Jose Leon Guerrero on the mic, guests, vendors and participants were entertained all day. The event kicked off at noon with welcoming announcements, opening the kids art station and then The Talent Box dancers hit the floor in front of a big crowd cheering them on. Friends With Instruments showcased their musical talent next, followed by Team Happy Hands, who performed a number of songs while doing sign language. SKIP entertainment performed a number of dance performances, including a surprise flash mob dance when the crowd began dispersing after they finished. Blue Maroon, an new up and coming band wowed the crowd, and are sure to do great things as Guam’s future musicians. A couple local guys stepped up to the mic to share some spoken word poetry, including James Park and Joe DeVera Cruz. A local fashion show featured a line of models showcasing the designs of Joseph Certeza and Ana Won Pat-Borja. Team Shatter, a group of local bartenders, showed off their flair talent, juggling bottles and wowing the crowd with their moves & tricks. Rachael Esteves, also known as Rach Against the Machine, hit the mic to share her amazing musical talent and lead us into the evening. As the day was winding down and getting darker, we plugged in a laser light machine and the kids had a blast with the glow sticks we passed out.
Raffle prizes were given out all day, and there was also a costume contest sign-up table. Participants got their photo taken, and photos will be uploaded this week to the Creative Indeed Facebook page to be voted on for the winning prizes.
HUGE THANK YOU to the sponsors that made this event a bigger success than ever before: BANK OF GUAM, SOROPTIMIST INTERNATIONAL OF GUAM, GUAM VISITOR’S BUREAU, and Calvo Enterprise, Mariana’s Variety, and Kai Productions.
THANK YOU to Jeff’s Pirates Cove for continuing to be a great venue for this festival, and all the staff for their hard work and great service.
THANK YOU to EVERYONE who came out and enjoyed the festivities, it wouldn’t be an event without all the guests!
PHOTOS: You can find almost 200 photos on the Creative Indeed Facebook page here: https://www.facebook.com/media/set/?set=a.817316538325070.1073741839.100432263346838&type=1
Some photos here in case you can’t access Facebook: 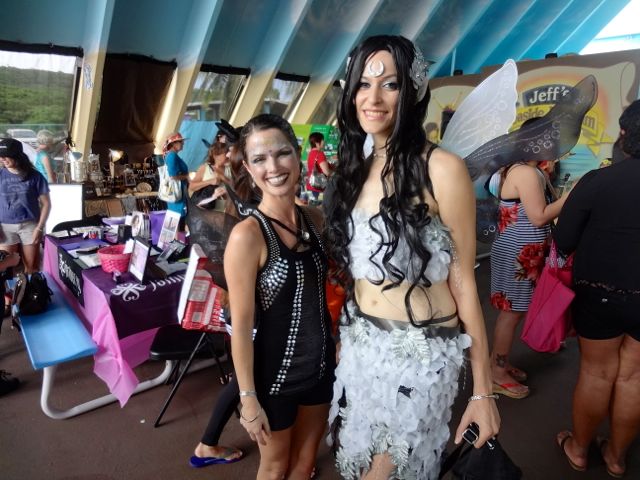